Content creator AC Soriano decided to pay tribute to actress Angel Locsin by reviving her most iconic roles during her time in GMA Network to ABS-CBN.

Soriano went live on Instagram and dressed up as Alwina from Mulawin, Lyka Raymundo from Lobo, Monica Santiago from The Legal Wife, and the superhero Narda from Darna.

Soriano’s ‘rusical’ gained praise from netizens. A rusical is a musical production on the television series RuPaul’s Drag Race.

Soriano’s Darna came out as the most impressive, according to viewers.

Soriano previously did an impersonation of Jodi Sta. Maria and the actress more than approved of it.

Soriano told ABS-CBN News said he was glad to have finally caught the attention of the actress.

Soriano informed the actress of his “Jodi Sta Maria: The Unauthorized Rusical” which Sta Maria anticipated.

Aside from the Dr. Jill character, Soriano also performed : Maya from “Be Careful With My Heart,” Amor from “Pangako Sa ‘Yo,” and Marissa from “Ang Sa Iyo Ay Akin,”

Soriano boosted his popularity when he remixed the hit series “The Broken Marriage Vow.” Before that, he was bashed on social media for pranks calling blue-collared workers. 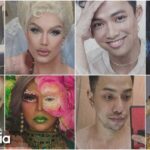