On the last day of February 2017, Frances Marie Savino Gavino had an unexpected experience which made a huge impact on her life.

She came across the hit movie I’m Drunk I Love You’s promo contest on Facebook. The mechanics is to confess their feelings to their crushes to win a month’s supply of premium drinks from Destileria Limtuaco and lootbags from the movie. Thousands of netizens participated in the contest and the internet swoon over the sweet confessions on the post.

Frances said she hesitated at first, but since she somehow knows that her crush, Josh Ricardo, is aware of her feelings, she decided to give it a go.

But to her surprise, the guy told her that he likes her too!

A large number of Facebook users also replied to her comment and expressed how giddy and envious they were of her.

Frances was truly glad because of what happened. She shared that Josh and her has been friends since the fifth grade but never did confess in fear of putting their friendship at risk.

“We’re just really thankful for IDILY’s promo. If it weren’t for the promo, I wouldn’t have the guts to confess,” she said.

As of the moment, she said that the both of them are contented and enjoys what they have right now. Also, they not rushing anything because they’ve known each other for a long time.

A large number of Facebook users also replied to her comment and expressed how giddy and envious they were of her. As a matter of fact, they are hoping that the both of them ends up together really soon! 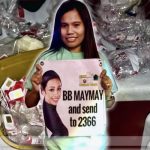