On a post dated August 20, Tulfo addressed PGH’s demand for him to apologize. 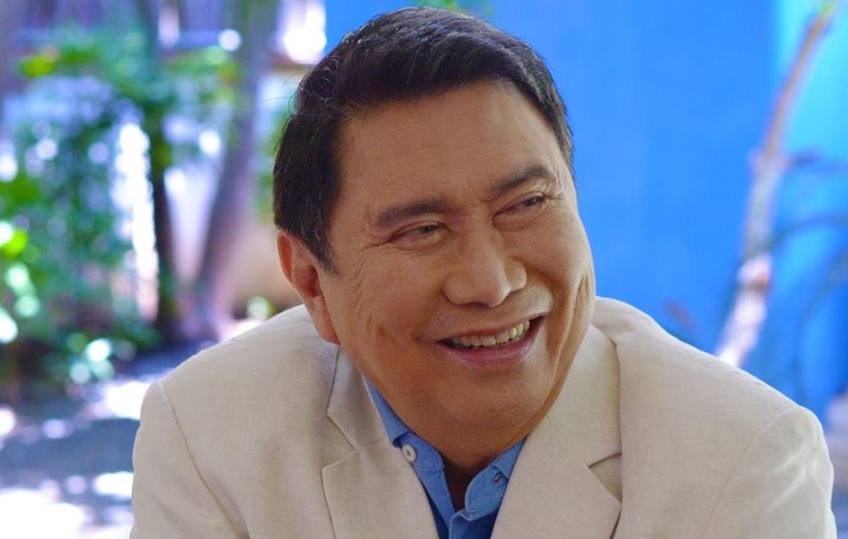 He wrote an apology directed to the patients at the hospital’s emergency room who got shocked by his outburst, however, he added will never apologize to the Dr. Jay Guerrero, who was the one assigned to the ER at that time.

I apologize to the patients at the PGH emergency room who were stunned by my outburst. Humihingi ako ng paumanhin sa inyo.

But i will never apologize to the doctor at the triage section who refused to look over the child patient I brought with me.

He added that he saw no compassion in the doctor’s face and if questioned PGH’s policy about not allowing videos to be taken inside the emergency room.

I didn’t see any shred of compassion or empathy on his face. Wala siyang ipinakita na pagkabahala sa pasyente.

The broadcaster also said that the reason for his outburst was the doctor’s decision to leave without paying attention to the child. He also reminded everyone that he’s not related to the child, but he never left her side even if he can just let his staff handle the situation.

Tandaan n’yo, di ko kaanu-ano ang bata. But I saw one of my grandchildren in her. I never left her side up to the very end.

The Netizens began slamming him in the comments section of his post, saying that he should just apologize as he violated a policy that is implemented in all hospitals in the country. 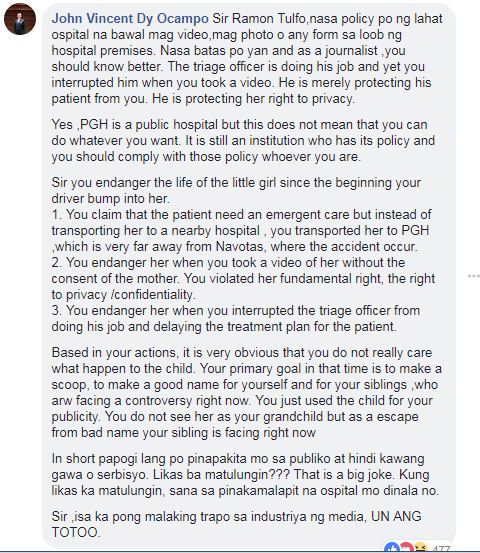 Sir Ramon Tulfo,nasa policy po ng lahat ospital na bawal mag video,mag photo o any form sa loob ng hospital premises. Nasa batas po yan and as a journalist ,you should know better. The triage officer is doing his job and yet you interrupted him when you took a video. He is merely protecting his patient from you. He is protecting her right to privacy.

Yes ,PGH is a public hospital but this does not mean that you can do whatever you want. It is still an institution who has its policy and you should comply with those policy whoever you are.

Sir you endanger the life of the little girl since the beginning your driver bump into her.
1. You claim that the patient need an emergent care but instead of transporting her to a nearby hospital , you transported her to PGH ,which is very far away from Navotas, where the accident occur.
2. You endanger her when you took a video of her without the consent of the mother. You violated her fundamental right, the right to privacy /confidentiality.
3. You endanger her when you interrupted the triage officer from doing his job and delaying the treatment plan for the patient.

Based in your actions, it is very obvious that you do not really care what happen to the child. Your primary goal in that time is to make a scoop, to make a good name for yourself and for your siblings ,who arw facing a controversy right now. You just used the child for your publicity. You do not see her as your grandchild but as a escape from bad name your sibling is facing right now

Libre po ang pagiging tanga. It amuses everyone! I don’t have to elaborate.
It is just his tactic. Tayo po ang may problema dahil pinapansin natin ang taong ito.
If educado nga tayo, hayaan nyu na xa pumutak. Pag walang pumapansin, perhaps he might cease to exist.
You can never educate a man who refuses to be educated.

Who tf are you to talk about compassion or empathy kung ikaw mismo hindi maisipang intindihin ang mga patakaran sa ospital? These doctors sacrifice hours of their time to attend to HUNDREDS of patients everyday, despite the lack of quality healthcare facilities in public hospitals like PGH. They are qualified enough to work anywhere they would wish to work but instead stayed at PGH, A PUBLIC HOSPITAL, MIND YOU, and serve the majority of Filipinos who simply cannot afford to pay fees at a private hospital.

How people continue to follow blindly these kinds of people with no ounce of humility whatsoever is beyond me. You don’t even have the balls to own up to your mistakes. You’re just a bully with a social following. 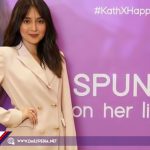