In a Facebook post posted by page ‘Dutertards’ and shared by Sonza, it showed his message for Marissa Flores and Jessica Soho, the SVP and VP of GMA News and Current Affairs, respectively.

It’s all because of Morong’s question regarding the death of a man looking for Cebu Archbishop Jose Palma at his residence on July 10.

The President then admitted that he doesn’t know about the story due to the fact that it has no connection with him. He then asked the reporter if he was violent and if he was armed, which the reporter failed to provide him with the complete details.

The report that Morong was pertaining to, the man was identified as 41-year-old Jeffrey Cañedo. He made his way in the Bishop’s place and sped inside the compound right without explaining his motive.

“The man appeared to be disturbed because he wasn’t clear on what he was saying. One of the secretaries of the archbishop noticed what seemed to be a firearm tucked on the man’s waist, prompting him to call the police,” said Chief Supt. Debold Sinas. 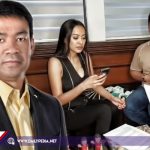