A woman’s virginity is indeed a big deal, since it is not meant to be given to someone who doesn’t deserve to receive a wonderful gift as precious as that.

While most men prefer to be with women who still have their virginity, there are still a lot of guys out there who doesn’t even care about such thing as that, just like this Facebook user named Kenneth Montañez.

In his post, he was pertaining to a certain person who was spreading rumors of how he made use Montañez wife back then and that he doesn’t want her back.

He did a shoutout saying that he doesn’t care whether he has slept with his wife in the past, since it isn’t the good s*x that he’s after, but rather the sweetest “yes” the woman will give Montañez as they walk to the altar.

Furthermore, he defended his wife from the man, adding the fact that continuously boasting about it to other people won’t do him any good since it is him who’ll have a negative impression on others. Montañez told him that the woman he said he already made use of, is the same woman who brought the light back in during the darkest days he had, the exact same woman who’s making him grateful and happy every single day.

Montañez’ Facebook friends who had read his post admired the man for his courage and for the way he treats his woman. They commended him and congratulated the woman for having a partner like him.

To conclude, the most important criteria to look for in a woman is not their virginity, but rather their attitude and most especially, their heart. Virginity won’t last long, but a golden heart does. 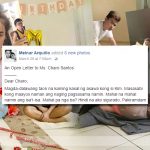 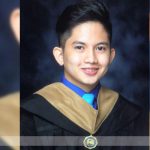