A report by PulitikaPilipinas has revealed that Stephen Villena, the student criticized by netizens as being disrespectful to Davao City Mayor Rodrigo Duterte during the UPLB academic forum on Governance, Transparency, and Social Transformation held on Friday, March 11, has apparently received a death threat from a supporter of the presidential candidate. As of press time, the article has been deleted.

Villena earned the ire of Duterte supporters after a video of his controversial conversation with the tough-talking mayor during the question and answer portion of the UPLB forum went viral on social media. Supporters of Duterte reportedly bullied and harassed Villena after the incident.

The student had the opportunity to ask Mayor Duterte how he would implement peace and order in the entire country without compromising the budget for education.

“In light of the issue involving some students of the University of the Philippines Los Baños, we enjoin all of you to be responsible citizens and exercise civility, intelligence, decency, and compassion when engaged in any discourse,” the statement read.

Meanwhile, Villena has posted an open letter on his Facebook account on Sunday, March 13 to shed light on the issue involving himself and Duterte. Villena stressed that he didn’t intend to disrespect Duterte and that he was only posing an “academic question which required an academic answer.”

According to Villena, the spliced video of his conversation with Duterte made him appear that he wanted the presidential candidate to leave.

” The spliced video only deepened the perception by many that I arrogantly wanted Mr. Duterte to leave immediately. I am not exactly suave and charming when I speak. This is probably why I was seen as insensitive. But let me just say this: MY PERCEIVED LINGUISTIC IMPERFECTION IN NO WAY IMPLIES AN ARROGANT DISPOSITION,” Villena wrote in his post. 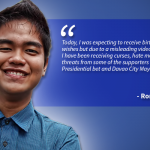 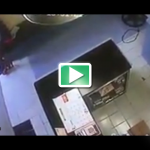