They say they come in three’s. And indeed, the past week has been nothing but bad luck for the people involved in escalator-related accidents in China. Because following the mother who saved her son, but ended up getting swallowed by the moving stairs, and the toddler who had his left arm amputated after it got sucked into escalator steps, another horrific accident has happened. This time, involving a mall cleaner at the Cloud Nine Mall in Shanghai.

Zhang, the 35-year-old cleaner, was making his rounds that night when he got to the lethal escalator at around 10:21 p.m. The mall was closing, but as that particular set of stairs led to the metro station, it was still in operation. CCTV footage shows that Zhang had stood with a mop on the section where the stairs met the floor plates. Apparently, a section gave way under his weight causing him to fall into the machinery where his left leg got entangled and stuck. Luckily, he was able to press the emergency stop, but his leg was so badly mangled that it had to be amputated.

The anguished family stated that Zhang had only started working at the mall three months ago. Furthermore, Zhang attested that he had already informed management of the malfunctioning escalator two weeks prior to the accident. Mall authorities, however, were quick to point out that cleaning of escalators should only be done starting at 10:30 p.m.

“We are deeply pained by this tragedy which resulted because standard operating procedures were not adhered to,” a Cloud Nine Spokesperson stated.

The following video shows CCTV footage of the accident, as uploaded by Daily Leak on YouTube. Because it contains disturbing content, viewer discretion is advised. 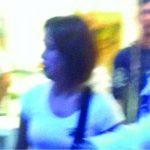 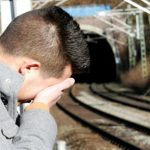