Mandaluyong City – Last August 23, 2014, with time stamp 6:47 AM, a CCTV caught a naked girl jumped out of a moving Toyota Camry that passed by the corner of Ma. Clara and Sgt. Bumatay St. The girl, still holding her clothes, was immediately responded by a security guard who also brought her to the nearby Barangay outpost.

The car was also seen slightly stopping at a curve to close the door.

“Nung makita ko, huminto siya tapos humahagulgol ng iyak, sabi nya, ‘tulong!Tulong!'”, says the security guard. He also added that he was not sure if the girl was pushed or she jumped out of the car. “Nakasubsob po sya, eh.”

In an interview with a witness, he said the girl was crying inside the Barangay outpost, asking for help. The victim said she’s 17 years old and working in an eatery in Mandaluyong. She told the witnesses that she was waiting for a jeep at Martinez St. on Saturday at 6 in the morning when a car stopped in front of her.

According to her, the driver, who looks like a foreigner, was asking her to accompany him to a remittance center for a cash out. She was then pulled inside the vehicle. The Barangay officials who interviewed the victim said the car drove around Mandaluyong. The car has an automatic lock, thus making it difficult for the girl to get out.

The victim also told them that the vehicle stopped in a street where the driver successfully raped her. The time the CCTV caught her, she said that when she saw that the car’s door was unlocked, she immediately jumped out of the vehicle. The police is now working on the case to find the suspect. Meanwhile, the traumatized victim is  currently with her family.

Here’s the video of the report: 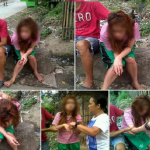 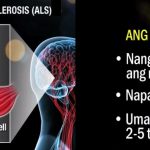