What makes a man straight or gay? Does doing “gay” sex acts automatically classify you as a homosexual?

These were some of the questions The Guyliner attempted to answer in a GQ article titled Having sex with a man doesn’t make you gay.

Citing a number of situations of men engaging in sexual acts with gay people, the author said being straight or being gay is so much more than sexual contact. Emphasizing that you as an individual can get to decide whether you’re straight or gay, the author said we are free to have sex with men or women and still label ourselves as straight.

“Having sex with a man doesn’t mean you’re gay, definitely not. You get to be who you want to be. But don’t forget the sacrifices your gay brothers make on a daily basis so you can have that freedom to choose,” the author wrote.

However, the author stressed that we must also own our sexuality.

“‘Gay’ sex acts aren’t something to be ashamed of; if you’re man enough to do it and still call yourself straight, be man enough to talk about it. Don’t let it be a dirty little secret; own your sexuality—whatever it may be—with pride,” the author concluded in the article. 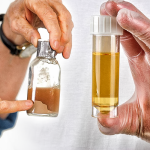