Ferdinand “Bongbong” Marcos Jr.’s supporters continue to do black propaganda on Vice President-elect Leni Robredo. After the cheating accusations stemming from the aesthetic changes done by Smartmatic on the transparency server of the Commission on Elections (COMELEC) and the voting trend/pattern theory, BBM supporters have started to make speculations about Robredo’s personal life and morals.

In a Facebook post by a certain Jun Yambao posted on the Marcos Loyalists FB page, pictures of VP-elect Robredo together with Quezon City Representative Jorge “Bolet” Banal were put together in a collage bearing the caption “Bagong Loveteam” to insinuate a romantic relationship between the two.

Banal is one of the stalwarts of Liberal Party, the same party VP elect Robredo belongs to. During the 2016 May elections, Banal was part of the campaign team for Robredo’s vice presidential bid as a close-in political consultant. He was even mentioned by Robredo as one of the five lifesavers in her campaign which included her three daughters Aika, Tricia, and Jillian and Quezon City Vice Mayor Joy Belmonte.

That closeness was targeted by the supporters of Marcos. Reading the comment section many were castigating Robredo for being “malandi” (flirtatious) while others even went extra mile to say Leni cheated on late husband Jesse Robredo with Banal.

Another black propaganda photo being circulated by the Marcos loyalists is the the picture of a large tarpaulin of Jesse Robredo with the manipulated caption “Taga Bicol kami, Ikinahihiya namin si Leni.” (We are from Bicol and we are ashamed of Leni.)

The picture was apparently was another product of photo editing skills.

In a post on Leni Gerono Robredo’s Facebook page, the fake photo was placed side-by-side with the original which had the words “Physicians for Peace celebrates Jesse’s life with PWDs” printed on it nstead. 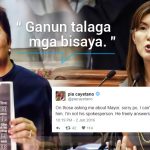 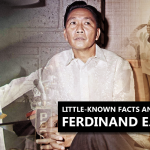