2016 Presidential aspirant and Davao City Mayor Rodrigo Duterte has made the headlines once again with another controversial remark, this time making a “promise” of forming a revolutionary government if elected as President of the Philippines.

A GMA News report noted that Duterte made the statement on April 27, 2016 after the New People’s Army (NPA) released a policeman they had held captive. Pfc. Edgardo Hilaga Jr. of the Philippine Army was released in Tulunan, Cotabato last Tuesday (April 26).

The Davao City Mayor has been very outspoken about his “closeness” to the NPA which has been considered an enemy of the state by the Philippine government and terrorist organization by the United States of America. Reports showed that Duterte approached an NPA camp in order to facilitate the release of the five policemen held captive by the armed rebel group.

The Davao Mayor then made the highly questionable statement:

[“I will form a new government. This (current system of government) is really broken. I will change this government. I will bring forth a revolution when I am already there (in Malacañang) because this is no longer for the people. This can no longer be solved by our constitution. It really can’t.”]

Even before he ran for President, Duterte has been very outspoken about the changing of the current system of government: first, by setting up a revolutionary government to give way to federalism.

Many have expressed their concerns and criticisms about this. Filipino netizens took to social media to air their thoughts.

Like his critics, supporters of Duterte also came to his defense…

The presidential rivals of Duterte also gave statements reacting to this controversial statement.

[“Revolution or radical change, is that supposed to be the answer to the problem of governance, to kill people? That’s really scary,” Vice President Jejomar Binay said.]

(“That is what he usually says—dismantle, remove. Then tomorrow, it won’t be the case. Hope he doesn’t toy with our feelings. It is a good thing that many believe in him. I hope he can prove that he really means what he says,” Senator Grace Poe-Lamazares said.)

(“The connection with the NPA has been proven, with the communist NPA to Mayor Duterte. If you want communism to reign here in our country, if you want the voices of the NPA to be louder than ever in our country, it is clear who you should choose,” Former Interior Secretary Mar Roxas said.)

Duterte told reporters that he will not set up a communist government in regards to inquiries about free trade agreement.

“We will adapt the same—hindi ito komunista—the same government and Constitution. We are governed by the Constitution,” Mayor Rodrigo Duterte said.

(“We will adapt the same—this is not communism—the same government and Constitution. We are governed by the Constitution,” Mayor Rodrigo Duterte said.)

In April 23, the Davao City Mayor known for his controversial statements and usually rude remarks revealed that they were all intentional to serve as a challenge or to test established societal systems. 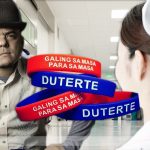 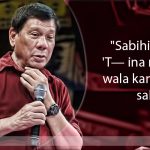