Your beer belly may be more deadly than being overweight or obese, a study has warned.

A team of doctors from the Mayo Clinic, Minnesota, discovered that average weight adults with a spare tire or beer belly of fat around the waist had twice the risk of early death compared to overweight or obese adults with normal fat distribution.

To arrive at the findings, the data from Third National Health and Nutrition Examination Survey (NHANES III) taken by 15,184 participants aged 18 to 90 were examined. More than half of the participants were women.

Based on physical measurements, body fat distribution was evaluated. Meanwhile, deaths were determined from records.

According to cardiologist Dr. Francisco Lopez-Jimenez, participants with normal weight but with central obesity have an increased risk of early death compared to obese people especially if they have a little fat around the middle.

“Obesity defined by BMI or measures of central obesity, such as waist-to-hip ratio (WHR) and waist circumference, is associated with increased total and cardiovascular mortality,” he explained.

British Heart Foundation senior cardiac nurse Christopher Allen said that having fat in the middle part of the body can lead to type 2 diabetes, which increases your risk for stroke or heart attack.

Previous human and animal studies have revealed that having fat tissues in the buttocks and legs may have a positive effect on glucose metabolism. 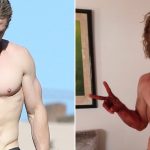