It’s not so uncommon anymore for those who commute that robberies happen every now and then. One of the oldest modus operandi of thieves is using a knapsack to cover his arm as he robs his victim. The modus involves using a knapsack with a hole where the thief’s hand can go through and steal from his victim’s bag without the victim knowing since the hand is hidden in the knapsack.

An anonymous tipster sent a video to the page Pinoy Viral Videos to help warn netizens and be on the lookout for the man in the video who robbed the woman beside him.

Many would say that this is a very big help to the public to help them become more vigilant. Some netizens, however, thought otherwise. Many berated the person who took the video for not doing anything and letting the crime happen before his very eyes. The anonymous uploader must have been expecting such a negative reaction from netizens which was why he opted to not be named.

Many told the uploader to be ashamed of himself for letting such an act take place. He was even told he had no heart and did not even pity the woman who was being robbed. He was even accused of merely taking the video just to get noticed.

Such a condition is known as the bystander effect. According to Wikipedia, the bystander effect is a social psychological phenomenon that refers to cases in which individuals do not offer any means of help to a victim when other people are present. This can be attributed to the perceived diffusion of responsibility (where onlookers are more likely to intervene if there are few or no other witnesses) and social influence (individuals in a group monitor the behavior of those around them to determine how to act). In this case, the person who took the video may have been unsure if he will be getting any support from his fellow passengers if he had called out the criminal’s deed.

This is human nature and the uploader could not be entirely blamed for not making a move. As some netizens have put it, would any of them have called out the thief’s actions had they been in the same situation?

How about you? What would you have done? 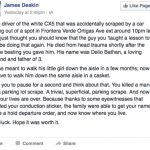