NOTE: Please refresh page for updated information regarding the pope’s first day in the Philippines.

January 15, 2015 is a wonderful day for the faithful Filipino Catholics who are awaiting the arrival of Pope Francis. This historical day marks the first time Pope Francis sets foot on Philippine soil; though he is not the first pope to visit the country.

The pope is expected to arrive at 5PM via Villamor Air Base where he will board a special jeepney-inspired pope mobile which would bring him to his official residence while in Manila: Apostolic Nunciature.

The route leading to Apostolic Nunciature is lined with people who braved the heat of the sun just to save their spot so they can catch a glimpse of the pope. Thousands of policemen were deployed along the route, acting as human barriers between Pope Francis and the people.

There are no scheduled activities for the pope to attend on his first day in the country so as to allow the pontiff to rest after his long journey from Sri Lanka. The official activities will begin tomorrow, Friday, when he meets with President Benigno Aquino III.

The Pope has Arrived

The Sri Lankan airplane carrying Pope Francis has touched down in Villamor Air Base ahead of schedule. The reception line is ready even as the skies are beginning to darken for the night. Along the reception line and the route leading to the pope’s official residence, various performers and faithful Catholics are waiting.

At the airport, the pope was received by several religious and political leaders, including the president. Because they are both heads of state, President Aquino is not required to kiss the pope’s ring yet he did this upon the pontiff’s arrival, earning him praise from the people for his humility and respect.

The Pope’s Motorcade has Arrived at the Apostolic Nunciature

The Pope arrived safely at the Apostolic Nunciature shortly before 7PM. We laud the public, media, and uniformed personnel who made the pope’s motorcade a successful one.

Based on extensive media coverage of the motorcade aired on TV and over the web, no one attempted to break the human chain barrier to try to get closer to the pope. Everyone stood on their respective spots and felt content that they were able to catch a glimpse of the pontiff even for just a few minutes.

When the pope arrived at the Apostolic Nunciature, everyone breathed a sigh of relief that nothing bad happened along the route, especially because his chosen pope mobile might be fast but was open and not bullet-proof. 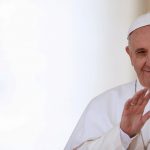 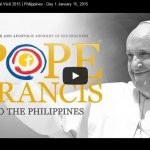