Philippines – While the large percentage of the country is getting well prepared and excited for the Pope’s arrival, the non-Catholic group consider this day as ordinary day. However, a number of the members of their sect believe that the papal visit will bring renewal to the nation’s faith in God.

A pastor of Seed of Faith United Methodist said that this historic visit would help people remember God in the face of trials.

He expressed, “The Philippines has long been disunited, disoriented and there are several violent incidents happening here. Since the pope is pro-people and pro-unity, I hope the orientation of his messages will dwell on those themes.”

During The Star’s interview with Rob Guevarra, a youth pastor and campus missionary of Victory Church-Malolos, he uttered that the pope is a “good person to look up to” adding his hope that at the end of the day, the pontiff will bring the people back to the One whom should we all be looking to, which is Jesus Christ.

The youth pastor also said that they will be praying for Pope Francis. “Hopefully, it (papal visit) boosts the moral standards of Filipinos, that they would start standing up for what is right. Hopefully, the corrupt Catholic officials would be moved by the pope,” he added.

Meanwhile, an elder of the Seventh Day Adventist Church named Jonathan Maglonzo considers this visit will result to temporary peace saying that dirty places are now clean and crimes will temporarily stop as respect for the pope’s visit.

The president of a local chapter of Iglesia ng Diyos kay Cristo Hesus, Frederico Reyes, expressed that he will be anticipating that the pope will extend his message of love, unity, and peace.

Noli Torres, pastor of God’s Family Bible Baptist Church also said,  “The faith of those who are indifferent towards God may be revived or awakened. Maaring ningas kugon lang (It may not last long).” He also added, “Once he’s gone, it (interest) will also be gone.”

Bishop Hubert dela Cruz of The Church of Jesus Christ Latter-Day Saints agreed to Torres saying how Filipinos are like ningas kugon. “They would believe what he is saying when he is in front of them but they would not do it afterwards.”

Dela Cruz however expressed his hope that the pontiff’s visit will bring positive change in the country. “Our leaders are Catholics but what are they doing? They are stealing money, oppressing people. I hope they (corrupt leaders) feel that the Philippines is experiencing poverty because of them,” he said.

He also added, “When the pope arrives, I hope their views will change, that they will realize that they are Christians who should follow the commandments of God, that as good Christians, they should the serve the people rather than seek to be served.” 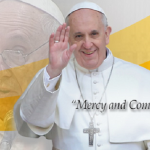