Do you believe in angels? One family shares their experience: a miracle where a guardian angel had surely participated in. How else could they explain what really happened, except believe that the angel existed?

The family of Chelsea Banton has made up their mind to let go of her, after watching her life prolonged only by the machines connected to her frail body. She’s been in and out of the hospital for years, battling various types of ailments and infections which are but complications to her multiple developmental disabilities.

Having been in the pediatric ICU for days, her mom Colleen told doctors she is ready to put a stop to Chelsea’s suffering. She gave orders to pull the plugs from the life-saving machines connected to the child’s frail body.

The Odd Man at the Door

Shortly after the tubes were taken out of Chelsea’s body, Colleen fervently prayed, perhaps for the eternal repose of her child’s soul as well as a painless passing. Despite having depended on life support for most of her life, the child continued to breathe even after 2 hours of being detached from the oxygen supply.

At around this time, a nurse on duty at the station happened to glance on the CCTV monitor and discovered a man standing in front of the one of the pediatric ICU’s double doors. It struck her how odd the man was standing, so she went out of the station to check on him.

To the nurse’s surprise, the man was not there – yet he appears to have not moved a muscle when she checked the CCTV monitor again. Puzzled, she asked a co-worker to verify what she had witnessed. She manned the station while the co-worker simultaneously checked the man at the door.

To their surprise, she could still see the man on the monitor yet the co-worker could not see him at the door. Even when they switched places, the same thing happened.

A Guardian Angel with Wings?

More hospital employees were called to witness the event, with everyone experiencing the same thing as the two nurses did. They decided to call Colleen, telling her what they had noticed.

The staff also noticed that it was difficult for them to take a picture of the man. No matter how many times they clicked the camera while focused on the spot by the door, no image ever appeared. Even the image on the CCTV monitor would not appear on their camera when they take a picture.

It was only when Colleen whipped out her mobile phone to take the picture that an image finally appeared – yet it was not what they expected. At the spot where the man is standing is a light in the shape of an angel with wings.

Crying now, Colleen realized they had just experienced a miracle. Perhaps, the guardian angel was not there to take Chelsea but to aid her while the machines were not attached to her body. Sobbing, Colleen and the nurses connected Chelsea back on the life-support machines.

The girl survived and was later discharged from the hospital. No one could really understand what had really happened but the family believes the man was Chelsea’s guardian angel. 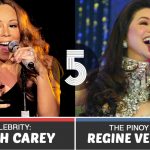 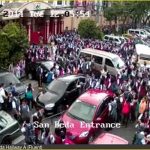