Duterte supporter, Marcos loyalist, and Hitler apologist Atty. Larry Gadon responded angrily to Vice President Leni Robredo after she dismissed him as a bad role model for wearing a face shield with a taped face mask behind it that went viral on social media.

In a short video, Gadon accused Robredo of cheating in the 2016 elections by stealing votes from then-vice presidential candidate and former senator Bongbong Marcos, which has never been proven.

Gadon said that he never wanted people to look at him as a role model, and proceeded to attack Robredo.

He also accused Robredo of ruining the Duterte administration’s image.

Gadon ran for senator in the 2019 senatorial election but failed miserably.

Robredo earlier said that the way Gadon taped a face mask behind his face shield was just wrong.

Gadon recently said it is ineffective to wear a face mask outdoors because he thinks it doesn’t provide sufficient protection from the coronavirus.

“What is more important is your healthy body, your strong immune system. Not the mask,” he told CNN’s Rex Remitio.

“Alam ng mga tao, lahat, may namamatay, may nagkakasakit. Nagsu-suffer ang economy. And the only way to go for us to fight this situation or to overcome the situation is lahat tayo magtulung-tulungan. So yung mga ganitong statements is not helping us at all,” she said.

Vergeire also said that health workers will suffer the most from misinformation such as the one Gadon displayed as cases are still surging.

Studies have already concluded that wearing face masks does provide protection from contracting the coronavirus and lessens the risk by 99% if worn with a face shield, said Vergeire.

Presidential spokesman Harry Roque himself said that Gadon is not a physician so “let that be his personal opinion.”

You may now check out the 113th issue of DOH’s Beat COVID-19 Today: Philippine Situationer! ✨ Click here to view and…

Posted by Department of Health (Philippines) on Tuesday, August 18, 2020

The country has now over 164,000 confirmed cases, and experts are saying it could go up to 230,000 by the end of August if Metro Manila and neighboring provinces continue with eased restrictions. 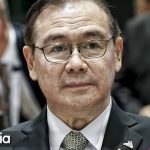