Deputy Executive Director of the Overseas Workers Welfare Administration (OWWA) Mocha Uson has been subpoenaed by the NBI and she posted a photo of the order on her Facebook page.

The NBI launched a probe into Uson’s actions for allegedly spreading fake news related to COVID-19.

Last month, Uson posted photos of newly purchased PPEs and credited the government for them. It was later found out that the equipment was actually donated by the SM Foundation.

She violated the Bayanihan We Heal As One Act which grants President Rodrigo Duterte additional powers to jail anyone for two months or fine them ₱10,000 to ₱1 million for spreading false information.

Section 6(f) of the Bayanihan Act provides that: “Individuals or groups creating, perpetuating, or spreading false information regarding the COVID-19 crisis on social media and other platforms, such information having no valid of beneficial effect on the population, and are clearly geared to promote chaos, panic, anarchy, fear, or confusion; and those participating in cyber incidents that make us or take advantage of the current crisis situation to prey on the public through scams, phishing, fraudulent emails, or other similar acts.”

“There was an order of the Secretary of Justice before for the NBI to investigate fake news, we included her in the investigation re-posting of PPEs,” said Lavin.

Known as the ‘Queen of Fake News’, Uson’s social media pages are full of false information but it is only now that she is being reprimanded for them.

One of her most controversial fake news posts was in 2017 when she posted photos of soldiers asking for prayers. In truth, the soldiers in the photos weren’t even Filipinos and she responded by saying it was just a form of ‘symbolism’.

Even with all her gaffes and violations, Uson has never been punished and many attribute this to her allegiance to the current administration.

Unfortunately, others aren’t so lucky. Some get arrested immediately for flouting ECQ guidelines, and some, like veteran Winston Ragos, are shot and killed. 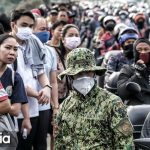