Filipinos are naturally compassionate and are quick to give alms to most beggars. But what if the one asking for a handout acts rudely and makes you rethink if they are worth your sympathy?

Netizen Twin Adjani Vine shared in a Facebook post a video of an annoying street kid they chanced upon while eating at Jollibee on June 29. In a short status post and a video she uploaded on the social media page, she left a question for netizens: Would you still give something to this kid who was so impertinent and showed no respect to people?

(If you were in the situation would you still give him food? Oftentimes, some beggars can be so rude.  WOULD YOU STILL HAVE  AN APPETITE ? Sorry, don’t blame us if we didn’t feed the kid, he’s so impolite.)

The post became viral with more than 71,300 views and comments reaching 843 as of this writing. Some netizens said they won’t feel any empathy with the kind of attitude the kid showed. Other street kids, they said, have enough manners to act decently even if they are beggars.  While others agreed with the post, some said it wasn’t right to record the incident.  Other netizens symphatized with the kid, and bashed the uploader of the video.

If you were in the same situation, what do you think would you do? Type your comment below. 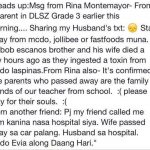 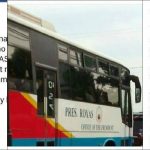