Boracay Inter-Agency Management and Rehabilitation Group (BIAMRG) and the Philippine National Police (PNP) have urged Boracay tourists and visitors to respect the Filipino culture by not wearing too revealing swimwear on Friday, October 11, after a Taiwanese woman went viral on social media on Wednesday, October 9, for doing so.

The Taiwanese woman’s photos show her wearing a two-piece string bikini so skimpy it barely left anything to the imagination.

On Wednesday, the Taiwanese woman and her boyfriend left their hotel and went to the beach. The management told the woman to not go out wearing the very revealing bikini but the couple proceeded anyway.

The next morning on Thursday, October 10, the woman then wore another string bikini but this time was confronted by Boracay officials.

BIAMRG chief Natividad Bernardino said, “They were told not to by the hotel management, but they said it was a form of art.

“We have our own cultural values as Filipinos and Asians. They should be able to respect that. There is no dress code. Maybe it is just common sense,” she added.

Bernardino also said that the hotel has a policy that requires its staff to orient tourists on the do’s and don’ts.

“Isa [daw] ‘yun sa way nila in order for them to express themselves how confident she is na may ganyang katawan siya, and for them, it’s okay with them kasi sa lugar nila, medyo liberated.”

In a phone interview, Baylon said, “We have this action taken for other tourists not to follow and also an eye-opener for resort owners to brief guests to dress appropriately.

“Their customs and traditions are not the same in our country. They have to respect our culture and tradition, and our proper decorum,” Baylon added.

The boyfriend said that wearing string bikinis is accepted in Taiwan.

“It’s quite normal for us in our country and that was her way to express herself with confidence.”

Baylon said that the people in charge should orient guests on what they can and cannot do.

“This will be the eye-opener. They must be briefed, and they must inform their guests upon check-in that they have to follow the proper decorum and the rules and regulations inside the island.” 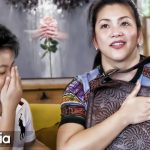