When Manny Pacquiao branded homosexuals as being “baser than animals,” comedian Vice Ganda quickly took a jab at the boxer on Twitter, saying that the Philippines doesn’t need any false prophets in the senate. But in a classic case of “judge not lest ye be judged,” the comedian’s retaliatory tweets came back to hurt him.

Netizens and supporters of the Pac-Man branded Vice as a hypocrite, claiming that the comedian had no right to be insulted by Manny’s words when he himself does not mince any words when dishing out insults. Several netizens reminded Vice Ganda about how he himself compared broadcaster Jessica Soho to a pig during a concert he had at the Araneta Coliseum in 2013.

The Pepeng Pinakamalupet Facebook page quoted a certain CN Sato as asking, “I know Manny made a mistake but who do you think is the real person here? You criticizing others while all of your jokes are below the belts? …Now i’m asking you, Who are you to criticize the person who gave so much HONOR to this country? (sic)”

Other netizens started posting videos of Vice’s past comedy routines wherein he made fun of the Pacquiao family and Manny’s mom Dionisia in particular.

The comedian, though, would not stay quiet. Last February 17, he took to Twitter again, this time, to defend himself. “I am not the issue. This is not about me. It is about a serious remark that affects the entire LGBT community. Don’t divert the issue.”

He further added that “A joke of a comedian is different from a statement of a ‘politician.’ So why take a joke seriously and take a serious statement as a joke?” 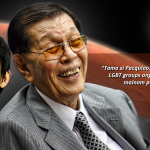 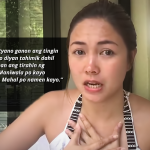