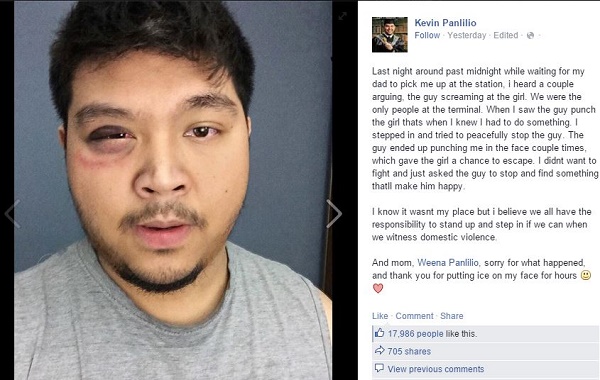 Domestic violence and abuse against women are becoming less discreet nowadays. We may not only hear of these horror stories in the news, but some of us may have known a story or two of a woman abused by his partner. But the question is, if you were to witness an actual physical abuse against a stranger, would you dare stop it from happening? Our story is about a modern day hero who risked his life in order to save a damsel in distress.

Kevin Panlilio, a Toronto-based graphic designer and video producer, witnessed domestic abuse first-hand at a station while waiting for his father to pick him up. He saw a couple arguing, until the man punched his partner. Panlilio, without hesitation, interfered the quarrel and peacefully stopped the man. However, the man got furious and punched him a couple of times in the face, which fortunately, gave the man’s partner a chance to escape.

In his Facebook page, Panlilio posted his photo with a bruised face and a black eye. In his caption was stated,

Last night around past midnight while waiting for my dad to pick me up at the station, i heard a couple arguing, the guy screaming at the girl. We were the only people at the terminal. When I saw the guy punch the girl thats when I knew I had to do something. I stepped in and tried to peacefully stop the guy. The guy ended up punching me in the face couple times, which gave the girl a chance to escape. I didnt want to fight and just asked the guy to stop and find something thatll make him happy.

I know it wasnt my place but i believe we all have the responsibility to stand up and step in if we can when we witness domestic violence.

And mom, Weena Panlilio, sorry for what happened, and thank you for putting ice on my face for hours.

We may think that heroes can only be found in the movies but this man proved that we should always stand up for what is right, even if it can risk our lives.

Currently, Panlilio’s post is now trending in social media. What he did was an inspiration to everyone. It is true, we are part of the abuse if we don’t do something to stop it. Kudos Kevin! 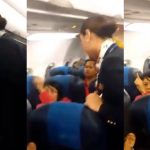 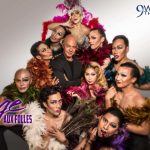