President Rodrigo Duterte got frustrated over the slow pace of COVID-19 vaccination in the country that he threatened people who refuse to get vaccinated with jail time or the injection of Ivermectin, which is a drug that is used to treat animals with parasites.

He also called the individuals the “carriers” of the virus as they travel while allegedly carrying COVID-19 and passing it on to other people.

“Itong mga gago na ayaw magpabakuna, and they are really carriers and they, you know, traveling from one place to another, carrying the virus, and then contaminating other people,” Duterte said during a televised national address.

He then mentioned the inoculation of Ivermectin to those who don’t want to get vaccinated.

Adding to that, Duterte also ordered those people to leave the country and go to India or America.

“Kung hindi kayo magpabakuna, umalis kayo sa Pilipinas. Go to India, if you want, or to America. But for as long as you are here and you are a human being and can carry the virus, magpabakuna ka. Otherwise, I will order all the barangay captains to have a tally of the people who refuse to be vaccinated.”

Netizens reacted, saying that it’s not right to threaten instead of guiding and educating those who don’t want to get vaccinated.

In Medicine, you have to look deep into why patients make certain decisions when it comes to their health. Most of the time, they just need guidance. Correct the misconceptions, educate them about vaccines, don’t threaten them. https://t.co/ejL6QEMNl2

Francis Baraan IV clarified Duterte’s claims by saying that non-vaccinated individuals are the potential carriers of the virus.

He stated that even those vaccinated can still be carriers as the drug only prevents severe symptoms, not cure them.

Vaccine prevents the exacerbation of symptoms—not cure it.

“Duterte is so obsessed with fear-mongering,” said Jules Guiang.

Duterte is so obsessed with fear mongering. In my understanding, there is vaccine hesitancy bcos of lack of accessible or lack of correct info about vaccine effects. Yet here’s another layer of fear. Sure Roque will say that Duterte is joking, but his words are policy right? https://t.co/HodkEmAlm3

A lawyer asked about the law being violated when one decides not to get vaccinated and if there are even enough doses to make it a strict requirement to Filipinos.

Is there even enough vaccines to make vaccination mandatory for all Filipinos?

What law is bring violated by refusing to be vaccinated? https://t.co/up41zy3kBT

Someone also mentioned that it is a person’s right to refuse the vaccine as it is not a crime.

Dont force people to be vaccinated. Its our right to refuse. Don't use ur power to control people. yes u r the pres. but ur power have a limits. u'll put us in jail for what? its not a crime to refuse to be vaccinated bc we have trust issues. u're getting on my nerves. https://t.co/g7PXk2qFfi

“Consent must be given voluntarily which means, patients have the right to refuse or undergo a procedure.”

It was also said that forcing a vaccine on a person is a violation of their bill of rights.

in ethicolegal, consent must be given voluntarily which means, patients have the right to refuse or undergo a procedure.

threatening the patient to have the vaccine against their will is a clear violation of patient's bill of rights. https://t.co/IzWQs8jCy6

“Why did Duterte think that harassment and threats are effective ways of convincing people? Simply because it’s the only thing he can confidently do.”

Why did Duterte think that harassment and threats are effective ways of convincing people? Simply because it’s the only thing he can confidently do. Being a competent leader is wayyy out of his league.#KumbinsihinHuwagTakutin#OUSTDUTERTENOW https://t.co/8BK8LklGSn

Presidential Spokesperson Harry Roque then clarified President Duterte’s threat saying that there should be a law in-placed for people to get arrested over the vaccine. However, the President can grant police power to implement policies that could violate human rights for public health protection. 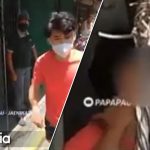