Amira is the sister of social media personality Ivana Alawi who has been struggling ever since she gave birth to her baby Gab.

Tulfo said that the father of the baby is Willie Asuncion, a businessman and an FM station owner. Asuncion sent a text to Ivana promising he would stop threatening Amira but will continue to disavow baby Gab.

In addition, Asuncion offered to pay P5 million to buy his child from Amira.

Amira’s mother Fatima Marbella, also called Mama Alawi appeared on the episode and gave her daughter’s side of the story. She said Asuncion lied about being single and was actually married when he got her daughter pregnant. Asuncion also never provided support to Amira and his child.

This sent Amira into depression. Tulfo tried contacting Asuncion and his team but received no feedback.

Asuncion is a co-founder of PLUS Foundation in 1998 as a separate 501 (c). He owns an unnamed FM radio station in the country although he is based in San Francisco, California. He specializes in strategic planning, sales, entrepreneurship, and customer service.

He currently serves as the Chief operating officer (COO) of HATS Business Solutions since 2005 and the President and marketing manager of Loopwing Philippines since January 2009.

Asuncion sticks with his claim that he is unmarried. 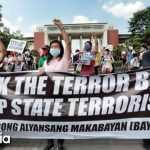