Netizens are praising SM Supermalls for waiving rentals for all their tenants nationwide from March 16 to April 14, 2020. SM Supermalls want their tenants to get more relief, and for them to be able to offer assistance to their employees during the duration of the Enhanced Community Quarantine.

SM Supermalls President Steven T. Tan said that its the least SM can do for their tenants.

“We share our tenant partners’ concerns at the unfortunate situation and will waive rental charges for those affected and unable to operate during this period.”

In addition, SM Supermalls announced that they have devoted ₱100,000,000 for protective equipment and supplies to be distributed to hospitals with the purpose of providing more protection for front liners.

We share our partner tenants' concerns during this unfortunate time. We will waive rental charges for those affected and unable to operate during this period. #TogetherAtSM, let's rise up and #HealPH.

Netizens were happy to hear the news.

Wow congrats on doing what you’re supposed to

Good initiative and understanding of your tenants dilemma 👏. May others businesses follow your lead. 🙏Thanks

But she is far too infamous for people to forget that she has a history of attacking ‘oligarchs’.

The same thing happened on March 17. Uson was attacked after thanking Manny Pangilinan for saying that he will be donating 4,000 liters of alcohol to front liners and will be raising more funds in the coming days. Pangilinan promised that his employees will continue to receive their salaries, and will even get 13-month pay.

Mocha Uson, along with DDS supporters have said some pretty bad things against a lot of ‘oligarchs’. But now she is thanking these businessmen for helping out the Filipino people during this pandemic.

Duterte himself has criticized big business in the past. As an example, he attacked the Ayalas and Manny Pangilinan saying that both parties have been exploiting their water contracts for at least two decades.

On February 20, Uson slammed the Senate for deferring a plenary session to give way to the ABS-CBN franchise renewal hearing.

But these oligarchs are doing more for the country than these DDS supporters are at the moment.

Ayala Corporation will be providing a ₱2.4 billion worth of relief packages to their own employees and stakeholders affected by the community quarantine. The conglomerate also donated 10,000 N95 masks to PGH, RITM and to other hospitals in Manila and Quezon City. They also launched a GCash option for people to donate to for health workers.

The Gokongwei Brothers Foundation (GBF) of JG Summit Holdings Inc has allotted ₱100,000,000 for protective equipment and test kits to be given to health workers.

ABS-CBN President Carlo Katigbak went on TV Patrol to announce that the Lopez Group is also donating ₱100,000,000 to start off their program ‘Pantawid ng Pag-ibig’, which aims to help out poor families affected by the enhanced community quarantine.

SM Prime Executive Committee Chairman Hans Sy  also said that they will be donating face masks, gowns, visors, hoods, gloves, and shoe covers to Philippine General Hospital (PGH) and Research Institute for Tropical Management (RITM). The company also formed a coalition with Manila Healthtek, Inc. which will make sure that 20,000 test kits will be distributed to hospitals.

GT Capital Holdings Group, along with Metrobank, donated ₱200,000,000 for test kits and PPE. They also provided a pool fund for their employees that are affected by the no-work policy.

The Jollibee Group Foundation formed partnerships with other companies, and were able to donate ₱100,000,000 worth of food packs for the front liners. Food packs would come from the different fast-food chains owned by the company like Jollibee, Chowking, Mang Inasal, Red Ribbon, Greenwich, Burger King, Panda Express, and PHO24.

Vicki Belo also made a promise to donate PPE to hospitals. She also that her employees will continue getting paid despite the quarantine. 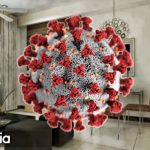