The ever so popular Vice Ganda warns individuals that are in relationships about chatting with other people, since this action can ruin them.

On an episode of It’s Showtime three days ago, a contestant shared his story of how he ruined his relationship with his ex-girlfriend due to him chatting with other women. He then said that there are a lot of women who hit up on him through the Messenger app.

In addition to that, he said that his ex-girlfriend was the jealous type and that he got caught because he does not delete conversations but those conversations that he had were ‘friendly.’

Vice commented that that ‘friendly’ excuse has been used too much already for people to believe it as a valid reason.

Furthermore, Vice said that you can just chat your friends but you yourself can distinguish between ‘friends’ and ‘potential lovers’.

Vice also joked about the line “Kumain ka na ba?” as flirtatious. He also admitted to being flirtatious in the past until he met this certain someone, who people are still waiting on to be officially revealed but there is a strong speculation that this someone is Ion Perez, a newbie in showbiz. 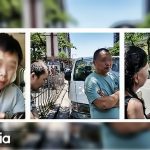