This comment is basically a copypasta. A copypasta is internet slang for any text that gets copied and pasted over and over again, usually done by netizens on online discussion forums and social networking sites. 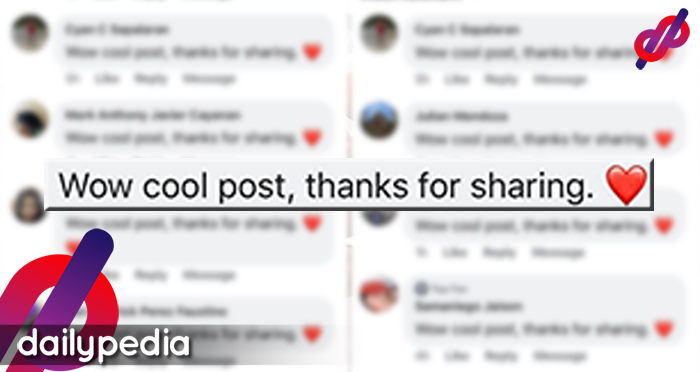 The “Wow cool post, thanks for sharing” comment all started with comments on the official IGN Facebook page in early May 2019.  The people who were commenting on IGN’s Facebook page were described as “woke.”

The origin is still not clear, but this is the best theory out there so far.

What’s up with the "Wow cool post IGN, thanks for sharing" comments all over IGN’s posts? from OutOfTheLoop

Some are saying that trolls are responsible for this while others say that people make this comment to get a Facebook Top Fan Badge.

The Facebook Top Fan Badge is a designation rewarded to the most active participants of a Facebook page. The user’s name is then shown with a gold star.

Since its release, the badge has been the subject of numerous jokes and memes regarding its perceived social currency.

A user will get rewarded based on how often they comment, share, react to, or watch a creator’s content, as well as the creator’s interactions with the fan and other criteria. Fans can opt in for this experience, and they can turn off the feature at any time.

This comment has become so commonplace that Karen Davila, a well-known journalist in the country, made a reference to it as she retweeted a post about how the leader of the number one party list in the polls, ACT-CIS, was actually associated with President Rodrigo Duterte.

The post was tweeted by Jason Park, saying, “The bots are malfunctioning after they’ve served their purpose in the election.”

Davila captioned it, “Cool post…thanks for sharing,” with a smiling emoji at the end.

Netizens had something to say about it.