Today, cameras are treated like necessities because of its function to capture moments and memories. In social media, you would see people posting photos of them when they were a lot younger, also called as ‘throwback.’

One Facebook user by the name of Kenneth Santos posted an ‘ultimate throwback’ of him along with his four other friends. He posted two photos to make a comparison. The throwback photo showed them in basketball attire while the current photo showedthat all of them have grown up to be normal adults.

But one thing about it had everyone surprised.

The current photo shows that one of Kenneth’s friends whose name is Joe-Marie Santos Jalla, went from a teenage boy to an adult woman with long hair while wearing woman’s clothes.

But everything was good as most netizens had positive things to say about it. Most were happy that the friends still accepted Joe-Marie for who he is and his decision.

Joe-Marie also appeared in ‘It’s Showtime’ and won Miss Q and A intertalaktic. 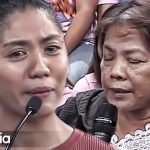