A man was exposed filming a woman in her skirt while seated by a mall’s staircase.

The people on the stairs were busy using their phones when a man walked in and sat on an empty space below a woman wearing a short skirt.

He began fiddling with his phone until he decided to pretend to call someone while looking around to make it look like he’s trying to find a companion.

A few moments later his head turned toward the girl and his phone flash suddenly lit up, exposing that he was using the camera of his phone, and not talking to someone.

The man immediately stood up and left in embarrassment.

A few netizens described the uploader as “advance mag-isip” as the deed hasn’t happened yet but she already started taking a video.

Another netizen called out the uploader, saying that she should’ve told the lady to sit properly.

Aprille Melendrez posted a lengthy comment regarding what could’ve done to prevent the deed. 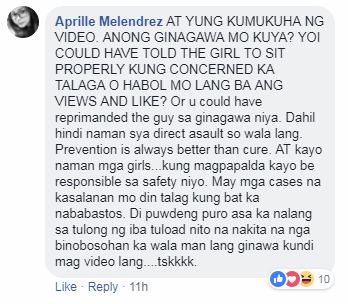