A youth group has criticized the possible reintroduction of death penalty in the Philippines, saying executions will only continue the cycle of violence in the country.

“How can we start the healing process if we continue the cycle of violence? Death penalty by hanging promotes retribution instead of rehabilitation, revenge rather than justice. The country still recovering from the divisiveness of the previous national election will only bleed further with such a controversial proposition,” said Paeng David, National Chairperson of Akbayan Youth.

David further pointed out that the death penalty is not the solution to criminality and drug addiction, and will only serve to target the poor and vulnerable.

“Execution is not the solution. Amnesty International reports even show that two-thirds of all countries have turned their backs against the barbaric practice, and more are expected to also abolish it. Other reports show no marked difference between crime rate in states that have death penalty and those who have no such policy,” emphasized David

“Apart from being ineffective, [the] death penalty is also anti-poor. In a justice system like ours, only the rich can afford good legal representation and the poor are left to be condemned to death,” continued David.

The group forwarded the idea that instead of bringing back the death penalty, the government should focus on reforming the justice system and promoting rehabilitative criminal justice in the country.

“A critical step to curbing criminality is to make sure our justice system works and that it provides fair judgment, regardless of who and how rich the person to be made to account is. Unless we ensure that trials are not rigged to favor the rich, the chances of executing the innocent will be great,” added David.

“Moreover, those who stray away from the law should never be stripped of their humanity. The young people who take drugs deserve to be given health and rehabilitative services to get them away from the influence of drugs. We extremely hope the new administration would reconsider, and instead of employing vindictive justice, choose to promote rehabilitative justice and give back to our youth their chance at a good life,” said David.

Finally, the youth group called for all Filipinos to rally together against public executions.

“The fight against [the] death penalty is a fight for our humanity. Different our votes might have been during elections, but together we must unite against such efforts to curb our humanity,” concluded David. 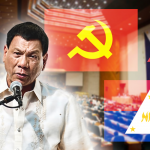