Last December 2, the Manila Times published an editorial cartoon entitled “Duterte’s Accomplishment vs Holy Trapos.” The cartoon depicted a Rodrigo Duterte, arms crossed, with a long list of his achievements behind him facing off against a trapo (traditional politician) portrayed as a crocodile in a barong. The trapo is kneeling down and uttering a prayer, but behind it, the crocodile’s tail is clutching onto bags of money. Duterte’s dialogue balloon shows an expletive, while the trapo’s balloon contains the words, “Amen! Praise the Lord! Hallelujah! Amen!”

Much like how it stirred up controversy with its AlDub editorial cartoon three months ago, the Manila Times is sparking debate anew with this latest editorial, attracting comments left and right on their Facebook page’s comments section.

To which Richard Agustin replied, “I’d rather choose a sheep in wolves clothing than a wolf pretending to be a sheep!” He added further, “There can never be development without peace and order, and we need them both to have social equality! This I truly believe only #Duterte2016 can deliver.”

Deern Rodriguez, however, is adamant in his belief that Duterte will just repeat what happened during the Marcos era. “sinabi nya na kung di aayon sa gusto nya ang congreso ay bubuwagin nya ito at magseself rule siya,” (He said if Congress does not agree with him, he will abolish it and establish self-rule.) Rodriguez also warns that Duterte’s apparently leaning towards the left will just lead to anarchy. “di pwedeng magsama ang npa at militar kailanman, someone has to lay down their arms, and federalism? in your dreams, magkakahatihati ang mga pilipino lalo, lalong gugulo ang mindanao, and duterte will be an anti american president dahil makakaliwa siya… di ko sinasabi na kaibiganin nya amerika pero sino mahihirapan dito? mga ofw na nangangailangan ng us visa, pahihirapan na nmn tayo.” (The military and the NPA can never get along, someone has to lay down their arms. And federalism, in your dreams. Filipinos will be even more divided, the situation in Mindanao will be even more chaotic, and Duterte will be an anti-American president because he is leftist… I am not saying he should befriend America, but who will suffer? The OFWs who need a US Visa. We will just suffer.)

Jake Bandar, while confessing that he is pro-Duterte, also shared his misgivings about the mayor’s apparent connection with the communist faction and his brusque manner. “Sa mga binitiwang kwento ni Duterte. Nung pagkabata pala ay may trauma siya sa pambubugbog ng magulang niya – kaya hindi nya maitatanggi ang pagiging violent nya… Naging Professor nya si Joma Sison kaya naging leftist ang pagiisip nya… At now, nagkaroon daw pala siya ng sex abuse mula sa pari ng Ateneo. With all these past experiences, hindi kaya nagiimagine lamang tayo ng isang ideal president natin, at bandang huli eh ma out of control na ito?? (Based on Duterte’s stories, he suffered trauma from when his parents’ beat him up as a child—that’s why he cannot deny his being violent. Joma Sison was his professor so he developed a leftist mentality. And now, he says he suffered sexual abuse from a priest at the Ateneo. With all these past experiences, aren’t we just imagining an ideal president and in the end, he’ll just go out of control?) It seems that we are pushing a monster to lead the Philippines.”

Zaldy Santiago, however, is still pushing for Duterte even if it means going through another martial law. “gusto ko manalo si Duterte dahil may bayag siya. alam nyo na meaning nun. matapang, may paninindigan, may prinsipyo. kung manalo sya at ipairal nya ang martial law, payag ako. dahil inabutan ko ang martial law sa panahon ni macoy. walang holdaper na hoholdap sa yu. walang mga hinayupak na addik na haharang sa u. kahit laliman ka ng gabi sa pag-uwi ay safe basta may I.D. ka.” (I want Duterte to win because he has balls. You know what I mean. Brave, has conviction, has principles. If he wins and establishes Martial Law, I’d be open to it. Because I was around during Marcos’s Martial Law. Back then, there were no hold-uppers to steal from you, no drug addicts to harass you. Even if you go home at night, you’d be safe just as long as you had an ID.)

Manners, however, still matter a lot. For some people, this is also a quality they look for in a presidentiable. “ayaw kong iboto ang bastos magsalita, deretsahan pede pero kabastusan wag na (I don’t want to vote for someone crass. Bluntness is okay, but rudeness is not),” said user Romar Sawit.

Efren Matanda, however, disagreed. “aanhin ko naman yung nagbabaitbaitan kung puro pagnanakaw naman ang kaya gawin sa puesto at di kaya mag solba ng malalaking problema? (What good is someone who just acts like a good person, but the only thing he does while in power is to steal and not solve any of the big problems?)”

Ian Strauss Mendoza, however, clarified that “It’s not about cursing. It’s about setting the right example as a leader.”

But Arturo Bollas appreciateD the mayor’s candor. “He’s unpretentious which Make him better than those ‘banal na aso, santong kabayo’ in government. (Blessed dog, saintly horse, a reference to a song title by the band Yano.)”

Rovic Legaspi agreeD, explaining that “…Language is made to impart knowledge, and emotions…”

FB user Armiel Bajador would like to end the debate by using Duterte’s own words. He quotes the candidate as thus: “A leader must be a terror to the few who are evil in order to protect the lives and well-being of the many who are good. I don’t care if I go to hell as long as the people I serve will live in paradise.” 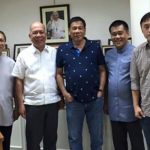 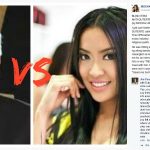