Ever since Mayor Rodrigo “Digong” Duterte announced his intention to run for the 2016 Presidential elections, a number of critics have been airing their thoughts about the mayor. However, there are also those who are quick to defend Duterte against his detractors. One of them is Mocha Uson, one of the members of the sexy girl band, Mocha Girls.

In her Facebook post on December 4, 2015, she talked about a prominent OPM artist who had a “patriotic family man” image who once asked to interview her, which eventually turned into a series of questions that were all too sexual.

I just can’t believe what I read about a blog of an OPM artist bashing DUTERTE calling him a very immoral person.…
This OPM artist is very well-known and is considered as an icon in the music industry. He has very close ties with the AQUINOs and has a very religious public image.

He was hitting so hard about the immorality of DUTERTE hindi po kinaya ng aking damdamin ang nabasa ko. Dahil noong panahon na ako ay nasangkot sa isang controversy about my sexuality, this OPM artist invited me for an interview. He said he wanted to feature me on his column. Since he’s a very “RESPECTABLE” man in the MUSIC INDUSTRY, I agreed to meet with him. But I was shocked how the interview went. His questions were not in anyway related to my group or my career. He asked me, “Gaano ka ba KA-LIBOG?” (How lustful are you?) I almost spit out my coffee and he went on saying “pero iba ang libog ni Mae, noh?” (Mae is my bandmate). Literally, this very respected OPM artist was hitting on Mae and me. The questions continued but it was all about SEX. I was really shocked because this OPM Artist has an image of being a PATRIOTIC FAMILY MAN. I was disappointed and left in disbelief. I never told anyone about this. I just kept it to myself thinking maybe he was just carried away by his own lust.

But when I saw his tweet/post on his verified social media account that he was bashing Duterte’s character, I was enraged. This really bothered me. SIR BOSS HONORABLE, napaka-plastic mo po. Mahiya ka naman po sa sinasabi mo. Ako kinikilabutan sa mga sinasabi mo po. (Sir Boss Honorable, you are such a hypocrite. You should be ashamed of what you are saying. I am getting goosebumps because of what you are saying.) Before you start pointing fingers make sure your hands are clean. Duterte is not a good role model to the youth but HE is a GOOD LEADER. Hindi puro salita na tulad mo.Sya may DAVAO. Ikaw? Hit song. [He’s not just a man of words like you. He has Davao City. How about you? Hit song(s).]  So don’t bother posting your input on how to run our country.

Mocha pointed out in her status that the man in the blind item  was a hypocrite who shouldn’t be giving his opinion about running the country.

In just a matter of hours, Paredes posted a comment on Mocha’s status, stating that she knew the questions would turn sexual even before the interview and that she asked for them. He also revealed a lot about Mocha’s family background and even said that he will post the said article.

Mocha naman. We are all entitled to our own opinion. My beef with Duterte is human rights. I interviewed you extensively sometime ago to write a article for my column but editor said it was not for Sunday reading. Yes , my interview with you was about largely about your sexual persona and you knew it was about that prior to the interview. You volunteered a lot of lurid info even without my asking. YOu liked sex and you were proud to be an advocate of free sex. Nothing wrong with that. Did I ask those things? I honestly cant remember. I can look for the audio. You were very candid, almost bragging pa nga which from an interviewers point of view is great. I dont think anything can shock you. But there was MUCH MORE to the interview.. I also asked you about your childhood. YOur mom who is a psychologist,. your dad who was murdered, where you went to school. How you felt about the murder and so many other things. I wanted to understand where you were coming from since your public persona is about sex and your sites were getting millions of hits. I wanted to humanize you. I think its pretty darn cheap of you to twist things just because you hate my politics. Labo nun. I treated with great respect. I did no harm to you. I will post the article if you wish.

A couple of days before Mocha’s status, Paredes had posted several tweets against Duterte on his personal account about Duterte’s cussing and the crime rate in Davao City.

Paredes even posted a tweet against the netizens who were defending Duterte on social media.

As of this writing, Mocha’s post has been shared over a thousand times on social media. 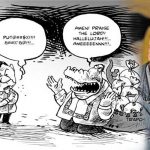 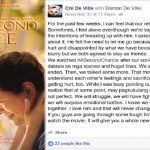