While on his way home from Cash N Carry Mall in Makati, Metro Manila, netizen Glenmarc ‘Flash’ Antonio boarded a pedicab, noticing that the driver was just a kid. He didn’t think about it much until the latter began pedaling furiously and the vehicle zoomed down the street.

Mindful of their safety, Antonio gently chided the driver to slow down, saying, “Bro, dahan-dahan lang.” The driver eventually slowed down but Antonio got a bit curious as to why the boy was going too fast.

The boy said he was in a hurry because he was already on his way home as well. But what touched Antonio was the child’s confession that he had to work hard to earn money because his family needed food. The child also added that it was his birthday the previous day.

This piqued Antonio’s interest. When asked, the driver proudly told him that he had just turned thirteen, something that saddened Antonio considering he had kids around the same age (eleven and twelve years old) as the pedicab driver. He would later learn that the child’s name was Reggie.

The child driver would also narrate that he is the eldest of four kids in the family. As he did not prod further, the rest of the ride went quietly. When they arrived at his home, Antonio asked him if he liked comic books and if he had a favorite superhero. He was again surprised when the child answered that his favorite superhero is God.

After some prodding, Reggie admitted to liking Spider-man. A cosplayer and comic book collector, Antonio later revealed on a Facebook post that he gave the child driver a Spider-man comic book, a brand new 2015 Free Comic Book Day shirt, and an Avengers water bottle from the Disney lootbag he won during the Pop Quiz Night at the Philippine Toy Con last Friday.

He asked Reggie whether he could take some pictures and when the boy agreed, he took the shots and later uploaded them on Facebook along with a detailed story about the encounter. He ended the post with this message:

Thank you Reggie, for making me realize that there are far more important things in this world than petty stuff. While I may not be able to help you out more with your current situation, I do hope that I have made your nameday a bit happier.

The post garnered positive comments from netizens, many of whom praised Antonio for his good deed and offering prayers for Reggie. 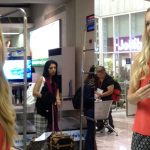 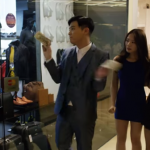