It is common for dog owners to have their faces licked by their furry best friends, but it turns out this isn’t advisable.

“It is not just what is carried in saliva. Dogs spend half of their life with their noses in nasty corners or hovering over dog droppings so their muzzles are full of bacteria, viruses, and germs of all sorts.”

Canine saliva is so dirty that there are recorded cases where people had to get serious treatment after getting licked by a dog.

A woman from the United Kingdom was in intensive care for weeks while suffering from multi-organ failure after getting infected by her Italian greyhound’s saliva.

The ‘lick of death’ story was told in a recent BMJ Case report. The woman was experiencing slurred speech while on the phone which caused her to call emergency medical services. The paramedics found her slumped in her armchair losing consciousness, but she regained it at the hospital and only reported a headache as a symptom which she had the night before. She was doing okay until after four days where she began suffering from confusion, headaches, diarrhea, a high fever, and her kidneys began to fail.

She was diagnosed with severe sepsis, commonly known as blood poisoning, and was transferred to the intensive care unit.

“There have only been about 13 cases reported in the entire United Kingdom, and I’m guessing on a similar scale in the U.S.,” said Shelley Rankin, associate professor of microbiology at Penn Vet, to CBS News. “In support of all things furry, this is a normal flora in the mouth of dogs.”

Although the woman was in her seventies, she had no problems with her immune system whatsoever. Luckily she was cured after two weeks on antibiotics.

Dr. Bruce Farber, chief of infectious diseases at North Shore University Hospital, added: “The last thing you want to do is alarm people that they’ll be infected if they get licked or kissed by a dog.”

The woman was fortunate that she didn’t lose her limbs, unlike past cases.

A man named Greg Manteufel lost all his limbs and a huge chunk of his nose after reportedly interacting with several dogs during a party. But the most probable cause was that he allowed his pitbull to ‘kiss’ him.

He had 14 major surgeries after his limbs started turning blue where the surgeons decided that it was best to amputate all extremities.

Manteufel is not angry at his dog and said he would keep it. He is currently in the process of learning how to walk again as reported by Inside Edition.

Marie Trainer from Ohio also did not disown her dog after it licked her small wound causing her to lose all her limbs. But she did however admit that at the time she was suffering from the bacteria, she’d rather have died because now she can’t do anything by herself. 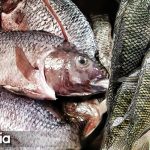