A bus conductor is going viral on social media after a photo of him standing on the railings inside a bus while handing out tickets went viral.

Rene Rivera uploaded the photos and the post has nearly 10k likes.

People compared him to Spider-man because of the way he would stand on the railings.

It may be funny, but it only shows that commuting in the Philippines needs improvement.

Netizens found the post to be funny. Netizens said that they admire the conductor’s effort in doing his job. 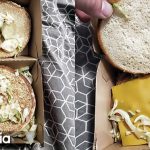