Before Typhoon Yolanda unleashed its fury in November 2013, Leyte-native Aaron James P. Almadro thought it best to check his parents into a hotel in Tacloban City. He figured since the hotel was new, it would be able to withstand a super typhoon. Almadro himself, on the other hand, would hunker down and weather the storm in their hometown of Palo.

Yolanda, however, proved to be one of the strongest tropical cyclones in recorded history. Devastation greeted Almadro when he hurried back to Tacloban. His father Virgilio, mother Guadalupe, and the helper who had stayed with them were among the more than 6,000 casualties of the storm. Although Almadro did all he could to try to retrieve the bodies, his efforts to try to secure a decent burial for them proved to take time. Local authorities had taken the bodies and had already interred them in a mass grave when he went back for them.

Now, after more than two years, Almadro has found that the place designated to memorialize typhoon victims had been neglected, the entire place overgrown with tall weeds. He posted pictures of the place on Facebook last July 10. “Dear Local Government,” he posted, “Have you forgotten about us?”

Facebook user Merlie Alunan replied that “I wish the city would build a memorial garden for the Yolanda dead with a chapel where one can light candles and meditate. There is no need for those crosses which actually mark nobody’s grave. The place can be maintained as a park and a tourist spot. A small fee could be collected for maintenance expenses. Is anyone listening?”

“…these crosses mark nothing.” Almadro agreed. “It just serves as a marker for a place where we can go. I have actually took hold of two different places, when I couldn’t find the one I originally marked. They should have just improved the mass grave at Basper, where the decomposing bodies of our loved ones are really are.”

UPDATE: Meanwhile, on what appears to be Tacloban City Mayor Christina Gonzales-Romualdez’s FB page, pictures have been uploaded showing construction workers and equipment appearing to be working on the memorial site’s upkeep. The album was accompanied by the following caption: “This is the HOLY CROSS MEMORIAL TODAY. WE ARE SETTING UP PERMANENT CEMENT CROSSES SOON. We have tasked a team To ensure and maintain the cleanliness of this area. WE DID NOT FORGET WE REMEMBERED.” 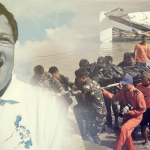 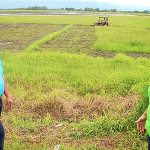