As the national election nears its inevitable conclusion on May 9, 2016, the rivalry between candidates continue to heat up. One apparent victim of black propaganda appears to be presidential aspirant and Davao Mayor Rodrigo Duterte when a post declaring “JUST IN: Duterte withdrew his Presidential Candidacy!” made the rounds on social media.

“I am a Filipino, I love my country and that is why I don’t want our countrymen to be divided based on their political beliefs. Hence, I Rodrigo Duterte officially withdraws my candidacy as President of the Republic of the Philippines – these are the words of Duterte on a rally in Plaza Miranda, Manila City On April 21, 2016 at 8:00AM. Supporters were shocked because of the unexpected announcement made by the presidential aspirant.”

Many had mixed feelings about this post, ranging from curiosity about the validity of the post, happiness for those who were opposed to Duterte as a candidate, and sadness for his hardcore supporters.

What many failed to notice that News Pinas is a satirical news site and that the articles published there should not be taken as real and authentic.

This is not the first time that many Filipinos on social media were misled by satirical pieces. Netizens who only use “free data” are unable to read the news in its entirety while others react immediately just by reading the title and not the content of the article itself. 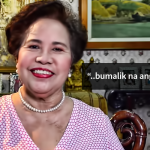 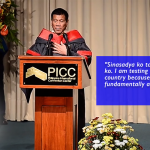