Actress turned politician Alma Moreno’s controversial interview with Karen Davila on ANC didn’t stop her from making it to the top 20 senatorial bets of a recent Pulse Asia survey.

The results of the latest Pulse Asia poll commissioned by ABS-CBN and conducted from November 8 to 15 revealed that Parañaque councilor  and senatorial candidate Moreno landed in the 18th to 20th place. Around 15.4% of the respondents said that they would vote for her if the elections were held during the said survey period.

Last month, Moreno made headlines after her awkward interview with Headstart host Davila went viral on various social media platforms. Moreno became the butt of jokes and the subject of memes after the interview took an uncomfortable turn.

Other Filipino celebrities who made it to the top 20 were Saranggani Congressman Manny Pacquiao (7-10), Manila Vice Mayor Isko Moreno, as well as TV host-actor Edu Manzano (14-18). Tito Sotto topped the survey involving 1,200 respondents across the country. 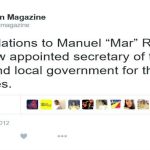 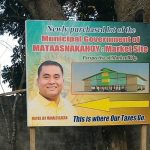