MANILA. Members of the Iglesia ni Cristo were allowed by the local government of Mandaluyong City to hold their mass action at Shaw Boulevard corner EDSA from Saturday, August 29 until Sunday August 30.

According to the city hall’s public information office, the permit to assemble at Crossing in Mandaluyong from 1 am on August 29 until the end of August 30 was signed by Mandaluyong City Administrator Ernesto Victorino.

It was not indicated until what time the members of INC are allowed to rally.

The permit, which is subject to several conditions, will only allow members to rally in the area under the Shaw station of the Metro Rail Transit 3 (MRT3), crossing major thoroughfare EDSA to allow northbound or southbound vehicles to use the underpass. This will also allow those travelling from Pasig to Shaw Blvd and vice versa to use the EDSA flyover.

Leaders and organizers are expected to maintain cleanliness and orderliness of the area during the period of assembly and to coordinate with Mandaluyong traffic officials. Meanwhile, participants  will only be allowed to use “responsible banners, streamers, or placards, which are allowed by law and not against public morals and public policy.”

In its permit, the city government said: “There will be no extension of your assembly unless granted in writing by this office.”

On Thursday, August 27, INC members assembled at the Department of Justice on Padre Faura to protest for the alleged meddling of Justice Secretary Leila de Lima into the church’s affairs. The INC members continued to hold their vigil in Manila until Friday, August 28. However, thousands of members clogged the northbound lane of EDSA near EDSA shrine on Friday afternoon causing massive traffic in the area.

Stressing that she is merely doing her job, De Lima denied the accusations of INC. 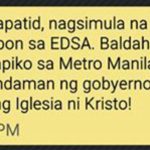 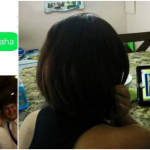