These days, a lot of kids are out in the streets after quitting school because of poverty yet one boy in Cebu City has become a source of inspiration for many after he was photographed studying on a sidewalk, under the light of a nearby establishment.

According to RachFeed, Joyce Torrefranca took the boy’s photo upon seeing him intent on studying as she felt it was a good source of inspiration. She would later tell Rappler that this young boy gave her inspiration to work harder.

“As a student it gave me an inspiration to work harder. I’m fortunate my parents were able to send me to school. I seldom go to coffeeshops to study, but this kid just hit me. You really don’t need much, you just have to be determined and focused on the things that you want to achieve…I hope that this kid will inspire millions of people.”

Her friend, Giomen Probert Ladra Alayon, also praised the child for his perseverance that even if there was inadequate lighting and a lack of personal space, he did not seem to mind because he was busy doing his homework.

If only kids these days could be like this young boy – content with what they have and making the most of what resources they have available. Surely, this young boy is a great inspiration to everyone. Proof of this is the fact that the photo has quickly gone viral after being reposted by Joyce’s friends and picked up by blogs and news sites. 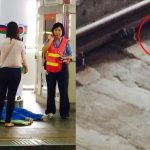 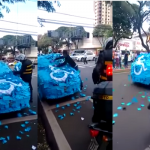