Seriously!? We can digest the news that MMDA officers wearing diapers but without pants? It’s a no-no! Where’s dignity?

It’s really impractical but these photos of MMDA officers wearing diapers without pants during Pope Francis’ visit in Manila were really hilarious! I get it when their reason for this is to ensure the traffic to smoothly run in the busy capital. But why there’s no pants? I don’t get the logic there!

The photos are authentic and not photoshopped. According to the uploader Tony Ahn on his comment, “Not photoshopped. They were with a group of cops, then took off their pants to be photographed by another photographer, who appears in one photo. He was posing them. Then they went back over to the other cops and put their pants back on. They were laughing and joking the whole time.”

Well, proud chairman Francis Tolentino ordered the city’s 2,000 traffic cops for this occasion to throw on diapers so they can do the duty while on duty. Just a smart ass!

UPDATE: According to one uploader Paul Agabin on a Facebook thread, “This is a social experiment, not real cops (Badges are fake).”

Just look at these photos and tell us your reactions: 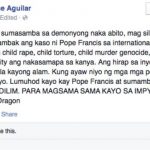 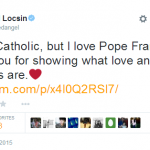