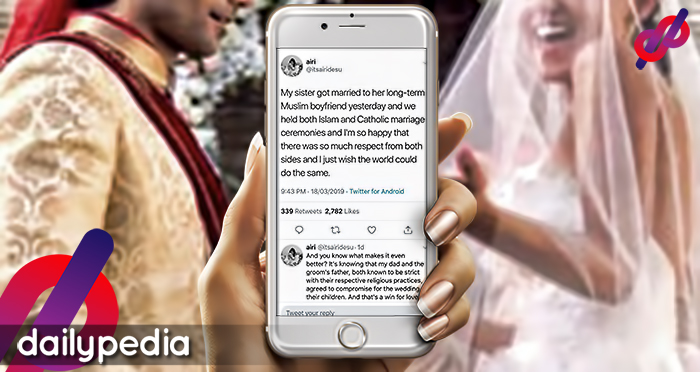 Marriage is a bond where two people are bound to love each other for eternity, and religion is a belief of faith to one supernatural being they call GOD. With two people who love each other, despite having different religions, was blessed with respect on their different beliefs.

Both Christian and Muslim religions strictly follow their belief and practices that sometimes lead to misunderstanding and arguments. Some would have avoided having a relationship with those from other religions, because one must sacrifice to which belief should be followed.

Unlike this couple, whose belief was taken over by love after many years of relationship, and finally got married.

Twitter user @itsairidesu posted on twitter the story of her sister’s wedding to her long-time Muslim boyfriend. What was unusual is that they both held Islam and Catholic marriage ceremonies. The couple received so much respect that both families have decided to unite, as she also wished that the world could do the same.

My sister got married to her long-term Muslim boyfriend yesterday and we held both Islam and Catholic marriage ceremonies and I'm so happy that there was so much respect from both sides and I just wish the world could do the same.

Conflicts among religious denominations, especially Catholics and Muslims, have been one of the problems not only in our country, but also the whole world. Because of this conflict, many civilians have lost their loved ones and home.

And you know what makes it even better? It's knowing that my dad and the groom's father, both known to be strict with their respective religious practices, agreed to compromise for the wedding of their children. And that's a win for love, if you ask me.

Though the government is already having their blueprint to solve this conflict, until now, it hasn’t been agreed upon and, thus, have not united in peace.

Cheers to the kind of love that conquers differences! pic.twitter.com/oZwJckZS45

The wedding of Airi’s sister gives us hope that someday both religions would learn to compromise with each other, and respect each other’s belief for the love of its people.

She wasn't wearing a hijab. She was wearing her white wedding gown, which of course was first consulted with the groom and groom's father. pic.twitter.com/KcPUtR5FQA

Like both the fathers of the couple, who are known to be strict with their respective religious practices, have agreed to compromise for the wedding of their children. 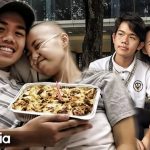 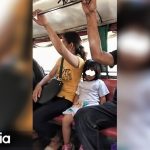