A couple from Michigan decided to wait for nine years to unwrap a present they received on their wedding day. It was only in May this year that Kathy and Brandon Gunn opened the wedding present from Kathy’s great Aunt Alison, which had been sitting unopened in their closet for years.

In a viral post featured on the Facebook page of Love What Matters, Kathy revealed that the white box was accompanied by a letter that said, “Do not open until your first disagreement.” Throughout those nine years, Kathy admitted that there had been plenty of arguments and disagreements but they resisted opening the box thinking that it would be some kind of relationship failure if they gave in.

Kathy wrote: “It forced us to reassess situations. Was it really time to open the box? What if this isn’t our worst fight? What if there’s a worse one ahead of us and we don’t have our box?!? As my Great Uncle Bill would say, ‘Nothing is ever so bad that it couldn’t get worse.’”

So what exactly drove the couple to finally open the gift?

Apparently, the lovebirds were enjoying a glass of wine at their home when they started thinking of a present for an upcoming wedding in Kalamazoo. It was at that moment that they realized that Aunt Alison’s gift was still unopened.

They finally got to see the contents of the box that night. The box contained two different bundles of money, wine glasses, bath products and a vase. The two notes addressed to both Kathy and Brandon gave them instructions on what each of them should do with the cash. While Kathy was asked to purchase a pizza and prepare a bath, Brandon was told to buy a bottle of wine and some flowers.

“Today, we decided to open that box, because I finally had a realization. I realized that the tools for creating and maintaining a strong, healthy marriage were never within that box—they were within us,” Kathy wrote. 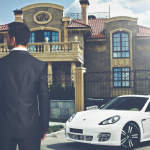