Days after the inauguration of President Rodrigo Duterte, die-hard Duterte supporter Mocha Uson posted on Facebook about an unusual sight that some netizens noticed during the event.

In her Facebook post, Uson shared an article by Trending News Portal which claimed the image of Christ appeared on the Philippine flag while President Duterte was delivering his inauguration speech.

[You can see clearly the image of Jesus on the Philippine flag during his inaugural speech. What do you think that means, what can you say? Please share.]

While the image on the Philippine flag somehow resembles that of Christ’s, it is not unusual for images to come up on a non-flat surface. Since the flag is moving, many different images that can be formed from the folds of the cloth that those with enough imagination may think resemble faces. This is similar to looking for familiar shapes in clouds or any rock formations. This phenomenon is called Pareidolia.

Pareidolia is a psychological phenomenon which involves stimulus (either image or sound) wherein the mind perceives a familiar pattern where actually nothing exists. It can cause people to interpret random images and or patterns of light and shadow as faces.

To prove this, this writer compared an image which can be seen on the official flag of the president which was also onstage during the speech.

This goes to show that all it takes is a little light and shadow plus a good imagination to see things for more than what they are. 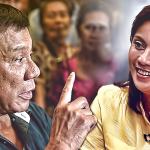 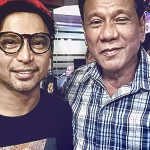