According to GMA News, Asia’s songbird decided to convert and become a born again Christian following a miscarriage in 2013. 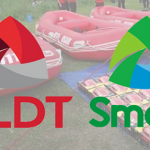