Senator Francis “Chiz” Escudero has been a consistent force to reckon with in the Vice Presidential race. Find out the reasons why Grace Poe’s running mate deserves your vote.

He was a product of the public school system of the University of the Philippines from grade school all the way to law school.

In 2005, Chiz was named one of the country’s Ten Outstanding Young Men (TOYM) for youth leadership. In 2007, he was the only Filipino to be named in Asia News Network’s Asia’s Idols.

He was recognized by the Rotary Golden Wheel Award for his contributions in political governance and the legislative field in 2012. 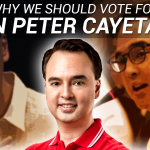