Almost thirty years after the late dictator Ferdinand Marcos Sr. was ousted through the EDSA People Power revolt in 1986, his son Sen. Ferdinand “Bongbong” Marcos, Jr. has decided to make his own mark as he seeks the vice presidency in the 2016 elections.

While this may not be an easy feat for the son of the country’s most infamous president, the younger Marcos—and Miriam Defensor-Santiago’s running mate—believes he’s more than ready to move on from the memories of the Martial Law years by focusing on the current problems of the country.

Here are 10 reasons you should choose BBM as your vice president.

1. More than his father’s son and namesake

With more than two decades of experience in government service, BBM is positive that the good and bad things associated with his father’s name can be knocked out by the service he has given to his countrymen. 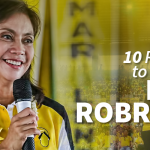