Based on the caption of the photo, Panelo allegedly took the selfie with the former president and current Representative of the Second District of Pampanga during her 69th birthday bash in her home in La Vista in Quezon City on April 5. The Supreme Court allowed Arroyo, who is currently under hospital detention at the Veterans Memorial Medical Center in Quezon City for plunder and electoral fraud charges, to spend three days in her residence from April 4 to 6.

The power behind Duterte straight from Atty. Panelo who forgot his privacy settings. Hi GMA! Where’s the neck brace? pic.twitter.com/cOruSZ4R22

According to Panelo’s caption, they celebrated along with “volunteer ladies” for Mayor Duterte.

On February 5, Duterte revealed his plans to release Arroyo from detention during the gathering of Friends of Rody Duterte in San Fernando, Pampanga.

Duterte announced during the gathering: “If I am elected President, I will release her. Why? Because the evidence [against her] is weak. I know that. I am a lawyer.”

Panelo has not released a statement regarding the issue as of this writing. 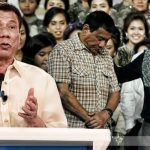 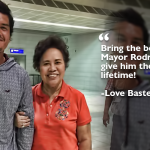