The tough-talking mayor of Davao City made the revelation on Monday, May 2.

(When I was mayor, Pastor bought three properties. He said I will buy for your children in case something bad happens to you while you’re doing your job.)

According to Duterte, Quiboloy gave him three properties in Woodridge Park, Ma-a in Davao City. The three lots in Ma-a, which were allegedly acquired from 1997 to 1998, were declared in Duterte’s 2015 Statement of Assets, Liabilities, and Networth (SALN).

Quiboloy also gifted Duterte a lot in Royal Pines, Matina in Davao City. This was also declared in his previous SALNs.

Aside from the lots, Quiloboy also reportedly gave Duterte vehicles such as a Nissan Safari and a Ford Expedition. The presidential candidate returned the Expedition but claimed that his daughter, Inday Sara, wanted to keep it.

( I returned it but Inday went crazy because she wanted to keep it. Where will you get the money to pay for gas? You’re like a fool.)

According to Duterte, he will still accept gifts from Quiloboy if he wins the presidency. In fact, Duterte is planning to use the pastor’s private jet if he gets elected president so he can sleep in Davao every day.

“He donates [gifts] in the name of God, para makatrabaho ako, para wala akong takot.’ (so that I can work, so I have no worries.) Is he liable for graft?” Duterte added.

Watch the video report below. 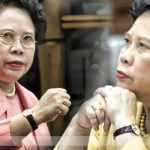 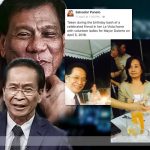