During his latest campaign sortie in Aklan, Capiz, Davao City Mayor Rodrigo Duterte made fun of a disabled friend and an elderly person. While many in the crowd laughed, just like the joke he made about an Australian rape-slay victim a week earlier, many found this latest joke tasteless.

[“One of whom (referring to a Person With Disability) is a former classmate. He suffered a stroke and can only move like so (mimics movement). I wanted to say, just kill yourself.”]

Duterte also shared the story of an old man who was still able to “check out” women with a help of an aide.

[“One of whom was 87 or 88. Upon our arrival, because we were loud, he moved liked so (tries to lift his head up), probably has a spinal (problem). His heads need to be moved (lifts head). Then when women were running, his faced moved as well (moves to the direction of the female runner), then the aide will return the head to its default resting position.”]

According to the National Council of Disability Affairs, a joke at the expense of the disabled is against the Republic Act No. 9442 or the act amending the Magna Carta for Disabled Persons. 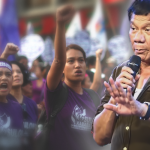 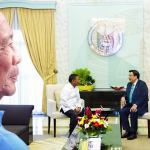